Numbers are ideas too. They're the ideas we use to count things or measure them. We might count Lucy's ball with the number one, but it is really just an idea in our minds.

If we want to talk or write about numbers, rather than just thinking of them, we need to use numerals such as "1" or "one". But we could also hold up 1 finger, or tap on the ground with our foot once in the same way that some dogs have been trained to "count". Lucy might thump her tail against the couch once if she was as clever as we like to pretend she is.

There are many different ways of referring to the same number. All numbers have names or symbols that we call numerals. Some numbers like \(\pi\) ("Pi") can't be written down exactly in decimal format, but we still have the idea of what "Pi" means, so it is still a number. 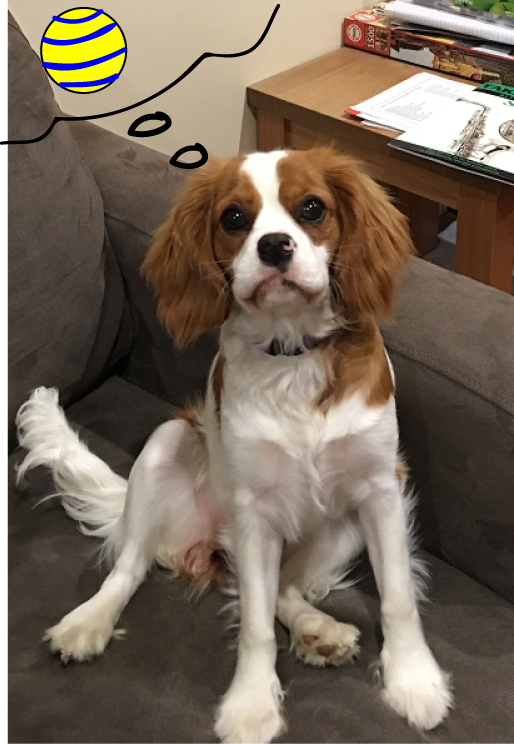 Numerals are the names or symbols that we use to refer to numbers when we are talking or writing about them.

Just like words are made up of letters, digits are the symbols that make up numerals.

Our everyday numerals are made up of the ten digits:

You can use digits to build numerals that are as long as you like! The numbers keep going on forever and ever, and so do the numerals that we use to write them. 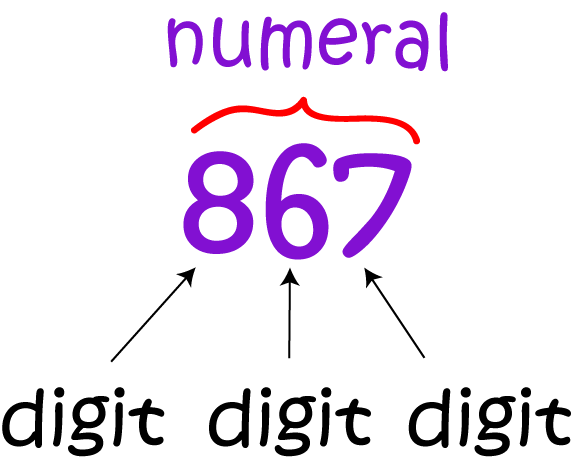 The Connection Between Digits, Numerals and Numbers

We know that letters make up words and words are used to describe the idea of something:

Getting the words confused

Everyone gets mixed up and says "Number" when they really mean "Numeral". It really doesn't matter because people will understand what you mean. The important thing to get right is to use "digit" only to refer to the symbols that make up numerals.

Other Types of Digits and Numerals

There are lots of different ways of writing numerals. The ancient Babylonians used a stylus to make wedges in clay tablets, the ancient Egyptians used hieroglyphic symbols for their digits and the Romans used Roman Numerals.

Why not search the internet and see if you can find some other different numbering systems? There are heaps of them!