Pictographs are a fun way to display data using pictures.

Each picture is used to represent a certain number of things.

There should be a key at the bottom of the pictograph telling you how many things each picture represents.

There's an island at the opening to Port Stephens where little penguins roost. Sam and Al were really interested in the penguins and decided to keep track of how many penguins they saw during their monthly visits over five months. They displayed their results using a pictograph: 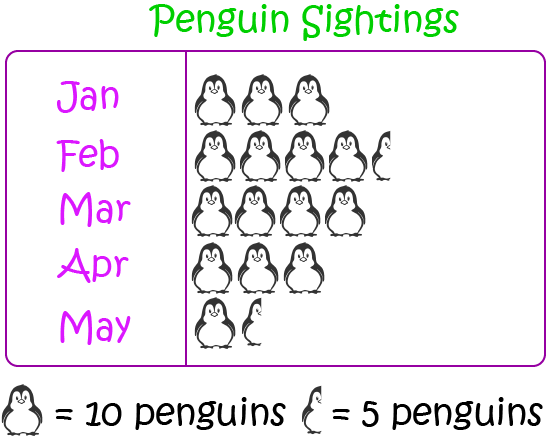 So, the pictograph shows that they saw

Pictographs are an interesting way to display data, and they're fun to draw up, but they might not be able to small differences in data. For example, what if Sam and Al had seen \(41\) penguins in March? How would they show their additional penguin on their pictograph?

You can also draw pictographs horizontally, like the one in the picture below. This time, Jasmin decided to survey her class mates to find out what their favourite vegetables were. She displayed her results in a pictograph. Yes, Jasmin's favourite vegetable really is broccoli! 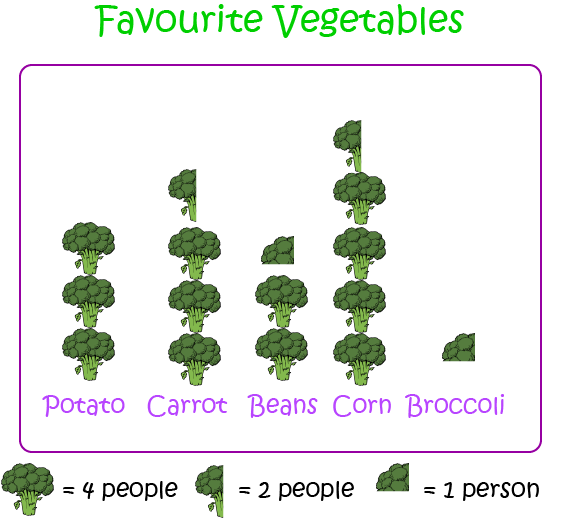 The pictograph shows that

I wonder who the one person who liked broccoli the best was!

Think of something you feel like investigating, and have fun drawing pictographs!