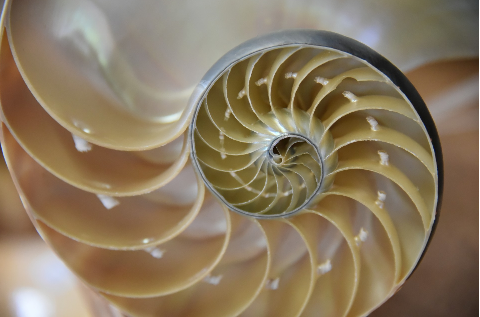 Patterns can be found everywhere! In nature, patterns are formed by things like the spirals of shells, the stripes of a tiger, the florets of broccoli, the leaves on trees, and the waves at the beach. Patterns can be man-made as well. The bricks used to build a building and the tiles in your bathroom form special kinds of patterns called tesselations. Finding and understanding patterns is lots of fun, and it helps us to understand the world around us. Finding patterns can even help us to predict the future! Patterns are very important.

Here's a simple pattern made out of coloured circles:

If you have lots of counters, stickers or lego bricks at home, you can play with them and build patterns like this yourself.

Why don't you see if you can predict the future? Have a go at working out how to continue the following patterns. How should you colour in the empty circles at the end of each line? The answers are below, but no peeking! Cover them up while you work on the patterns.

Here's how I thought we should continue the patterns. Do you agree? 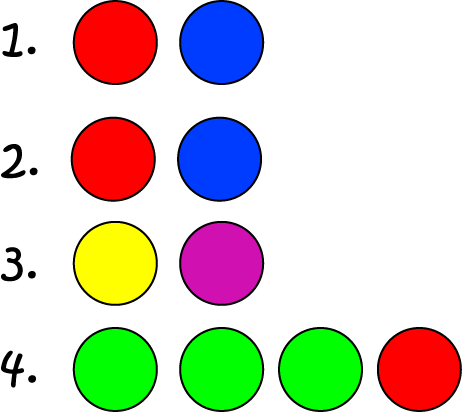 We can also use shapes to form different patterns. Here's an example to start with:

Do you notice part of the pattern that is repeated over and over again to form the whole pattern? There's a red circle, followed by a blue star, followed by a yellow hexagon. If you made a stamp containing those 3 shapes in that order, you could stamp it over and over again on a piece of paper and make a pattern as long as you like. Of course, you could also draw the shapes in a paint program on your computer and do the same thing using cut and paste!

Why don't you see if you can predict the future? Have a go at working out how to continue the following patterns. What should you use to fill in the empty squares at the end of each line? Look for a small part of the pattern that is repeated over and over again to form the whole pattern. The answers are below, but no peeking! Cover them up while you work on the patterns.

Here's how I thought we should continue the patterns. Do you agree? 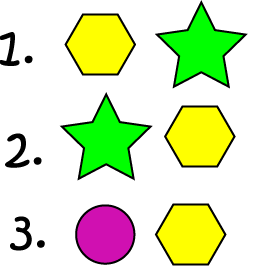 We can also form patterns out of numbers. You can read about lots of interesting patterns in the article about number patterns, but let's just have a look at a few simple examples.

Building your own number patterns

You can use just about anything you can find around the house or backyard to make patterns. The family cat might not be too impressed if you tried to make a pattern out of its whiskers, but things like coins, buttons, blocks, gum nuts, peas or toothpicks shouldn't cause too much trouble. Well, maybe the peas aren't such a good idea!

Here's an example of a pattern built out of blocks:

Patterns can be found just about anywhere. Why not have a play and see if you can come up with some interesting patterns of your own? Just don't tell mum and dad that I said it was OK to play with your peas... That can be our little secret.